Almost all of natural gas transported by the DBNGP is produced in the offshore Carnarvon Basin on the North West Shelf.

Quadrant Energy & Santos completed their Devil Creek project in late 2011, this plant processes gas from the Quadrant Energy / Santos Reindeer fields and with a capacity of 220 TJ/d.

BHP & Quadrant Energy completed the Macedon project in 2013 with an initial processing capacity of 200TJ/d.

In 2013 DBP completed the metering station for the connection of the Chevron operated Gorgon project which will add 187 TJ/d processing capacity from 2016, with a possible expansion to 300TJ/d.

The Chevron operated Wheatstone project is planned to add up to 200 TJ/d to domestic supply from 2018.

Closer to Perth are smaller Perth Basin Gas Production Facilities. Red Gully (owned and operated by Empire Oil and Gas) currently supplies up to 10TJ/d into the DBNGP.  New gas production facilities are planned for this region. 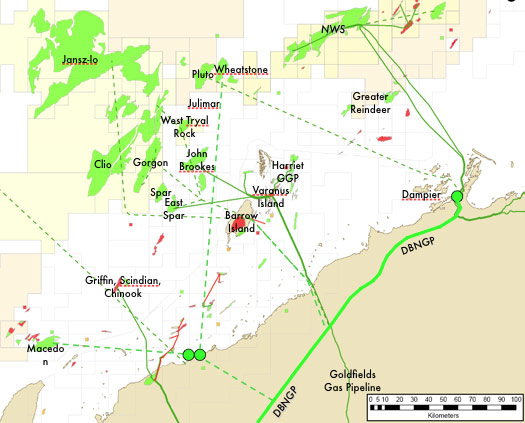